You are cordially invited to attend our Computer Graphics and Visualization Seminar on Thursday, November 15th, 2018, 15:45-17:45h, at Pulse-Hall 2.

Huinan Jiang
Title
A Chebyshev Semi-Iterative Approach for Accelerating Projective and Position-based Dynamics
Abstract
In this paper, we study the use of the Chebyshev semi-iterative approach in projective and position-based dynamics. Although projective dynamics is fundamentally nonlinear, its convergence behavior is similar to that of an iterative method solving a linear system. Because of that, we can estimate the “spectral radius” and use it in the Chebyshev approach to accelerate the convergence by at least one order of magnitude, when the global step is handled by the direct solver, the Jacobi solver, or even the Gauss-Seidel solver. Our experiment shows that the combination of the Chebyshev approach and the direct solver runs fastest on CPU, while the combination of the Chebyshev approach and the Jacobi solver outperforms any other combination on GPU, as it is highly compatible with parallel computing. Our experiment further shows position-based dynamics can be accelerated by the Chebyshev approach as well, although the effect is less obvious for tetrahedral meshes. The whole approach is simple, fast, effective, GPU-friendly, and has a small memory cost.

Jesse Tilro
Title
Phase-Functioned Neural Networks for Character Control
Abstract
We present a real-time character control mechanism using a novel neural network architecture called a Phase-Functioned Neural Network. In this network structure, the weights are computed via a cyclic function which uses the phase as an input. Along with the phase, our system takes as input user controls, the previous state of the character, the geometry of the scene, and automatically produces high quality motions that achieve the desired user control. The entire network is trained in an end-to-end fashion on a large dataset composed of locomotion such as walking, running, jumping, and climbing movements fitted into virtual environments. Our system can therefore automatically produce motions where the character adapts to different geometric environments such as walking and running over rough terrain, climbing over large rocks, jumping over obstacles, and crouching under low ceilings. Our network architecture produces higher quality results than time-series autoregressive models such as LSTMs as it deals explicitly with the latent variable of motion relating to the phase. Once trained, our system is also extremely fast and compact, requiring only milliseconds of execution time and a few megabytes of memory, even when trained on gigabytes of motion data. Our work is most appropriate for controlling characters in interactive scenes such as computer games and virtual reality systems. 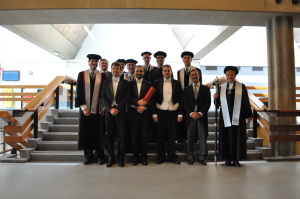 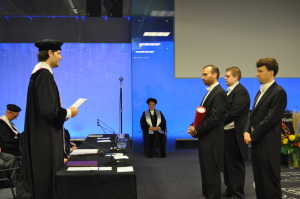 TU Delta has just posted a nice story on the new games that our undergrad students developed during the Games Project 2014. The article includes a list of YouTube links to their awesome trailers: check them out!

On Monday, there will be another chance to see these projects and many more at the second day of the open days.

Want to contribute to science while playing? Look no further!

Help our group’s research by playing a fun game. Build your own settlement on OpenClonk, an open source game where you control your group of humanoid beings!

Download the game here. To play, join a network game and play on the server named “TU Delft”.

This research will collect data on how you play this game. All the data will be analyzed by algorithms to identify common playing styles. In the future, we want to adapt the interactions of the game, on the fly, to fit the identified player styles.

PS: If you see the error below, just click ok. Everything will work fine!

The final presentation of the Games Project took place yesterday, followed by the traditional games market, at the EEMCS faculty hall. This year’s assignment was somewhat unusual: make a game to entertain a whole bunch of people who just happen to stay together in the same place, possibly for a short period of time. The results were, well… amazing, to say the least!

In the meantime Delta, the university’s magazine, has published this story (in Dutch).
We’ll be posting complete game descriptions and trailers on the Games Project site after the break. Stay tuned.

The latest issue of Quadraad, our faculty magazine for employees, features our group twice.

Read all about it here in the April issue of Quadraad.

You are cordially invited to attend the next Computer Graphics and Visualization (CGV) Colloquium, which will be held on Tuesday, December 18 at 15:45 in the Lipkenszaal, room LB 01.150 in the EEMCS building.

We are extremely happy to welcome Professor Jim Whitehead of the University of California, Santa Cruz, as our guest speaker.

The title and abstract of his talk are as follows:

Abstract: Today, level design for computer games is presented as a process of crafting space to achieve a set of high-level qualities, such as pacing, flow, and challenge. This results in a one size fits all approach, with no guidance on precisely how to achieve these qualities in specific game genres. In contrast, we present an approach to level design that is specific to individual game genres. This permits a more detailed analysis that exposes the design idioms common to each genre, and permits level design to be understood in a more concrete way. As examples, the talk will present level analysis of 2d platformers, 2d space shooters (shmups), and 3d first person shooter genres. Use of this genre-specific level design knowledge for procedural content generation is shown in the final part of the talk, which presents the Launchpad system for procedural level design of 2d platformers.

Bio: Jim Whitehead is Professor and Chair of Computer Science at the University of California, Santa Cruz, where he helped create its game program. Prof. Whitehead is also the President of the Society for the Advancement of the Science of Digital Games, which operates the yearlyFoundations of Digital Games (FDG) conference. He has research interests in procedural content generation, level design, application of games to software engineering, and software bugs, especially their prediction. He received his PhD in Information and Computer Science from the University of California, Irvine in 2000.

On the 17th December, Tim Tutenel will defend his PhD thesis: Semantic Game Worlds. The defense is open for the public and guests are therefore invited to attend. Before the actual defense, Tim will give a short introduction to the subject of his thesis (in Dutch), beginning at 12:00. After that, the defense (in English) will start at 12:30.

The visual quality of game worlds increased massively in the last three decades. However, the closer game worlds depict reality, the more noticeable it is for gamers when objects do not behave accordingly. An important problem is that the data of a game world is often scattered across different components of the game engine. What lacks is a common semantic representation that can act as the glue between these components.

In this thesis we define semantic game worlds as game worlds that are populated with objects enriched with semantics. They offer game programmers a consistent representation that can be shared by game engine components. Moreover, this representation offers designers a way to moderate conflicts between procedural content generation techniques and it enables them to specify object behavior in a generic manner.